HomeNewsArchbishop Hočevar: We are created as different, but a dialogue is devised out of it

Archbishop Hočevar: We are created as different, but a dialogue is devised out of it 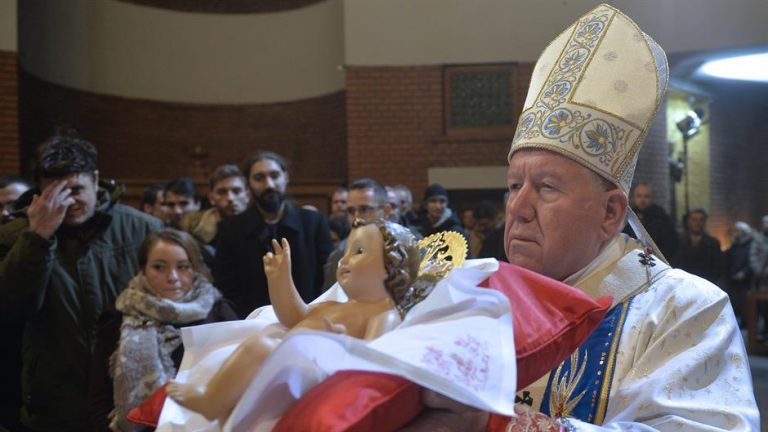 Belgrade Archbishop, Monsignor Stanislav Hočevar emphasized today, during Christmas Mass in the church Christ the King in Belgrade, that God created each individual as a original, but that diversity isn’t directed against the other person, but, on the contrary, that we are “born for each other”.

“The essence of this feast is mutual solidarity”, Hočevar said, stating that only God can bring that diversity together.

He emphasized that each person should preserve his/her own originality, but those diversities become “one heart and one soul”.

“God has created us to be original, authentic, as the stars in the sky, but each of us should ask oneself if one preserved his/her splendor”, Archbishop Hočevar said.

According to his words, that isn’t only unity in emotions, or God forbid, that everybody should think or do the same”, but it leads to complementarity.

Hočevar said that those who are responsible for social community should enable finding that very complementarity.

“If there is already diversity between us, there is also a dialogue”, Hočevar emphasized, pointing out to the necessity of continual dialogue.

Hočevar stated that Christmas generates “friendship, unity and a wish to get to know each other as best as we can”.

Hočevar said that, while coming to a studio this morning, the citizens greeted him all the way wishing him Merry Christmas, even though they are not Catholics,

“That tells us too that Christmas inspires, that it unites us”, Archbishop Hočevar said.

He said in his Christmas epistle that the essence of Christmas isn’t “being around rich table but new and genuine unity with those who are forgotten, unsuitable and unnecessary”.

“Shall we celebrate with all our strength a day of Jesus’s birth this year too even though we have less childbirth, and so many young people  leaving this country, where used to be a fierce fight for life, which was defended, where liberty was preserved. We wonder, is there a point in expecting peace from Him, who was declared a ‘Prince of Peace’, and  true peace – seems farther and farther from us”, said Hočevar.

“All of us are joyful since God enriched you so much through history and we wish for you to be an inspiration to all members of Your church and the power to the citizens of our country and whole region”, Hočevar stated.

Christmas celebration lasts for a few days. Catholics celebrate it until the feast of Three Kings on January 6th.