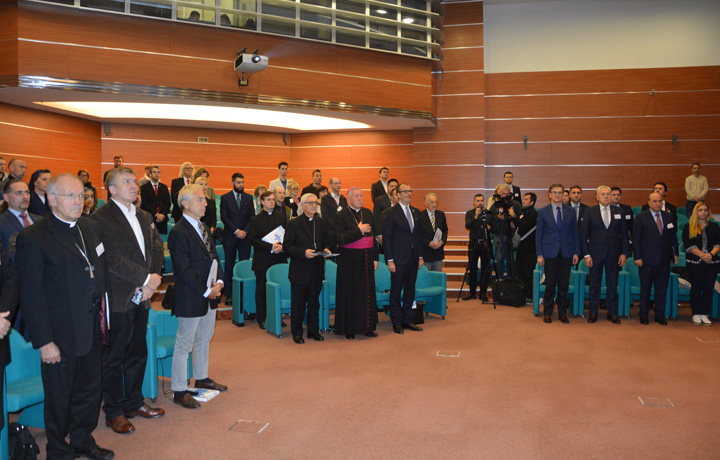 Belgrade Archdiocese held a conference titled European Identityon the occasion of 100th anniversary of the end of the First World War. The Conference was held in the premises of the National Bank of Serbia in Belgrade on Friday, 09. 11. 2018. Belgrade Archbishop mons. Stanislav Hočevar opened the conference along with H.E. Sam Fabrizi Head of the EU Delegation to Serbia. Archbishop mons. Stanislav Hočevar, greeted and blessed the participants praying that the Conference brings concrete results in the future. H.E. Mr. SemFabrzi reminded participants of the foundations of the European community, built by wise politicians and dedicated Christians such as Konrad Adenauer, Alcide De Gasperi and RobertSchuman. Distinguished speakers at the conference included Darko Tanaskovic, mons. Anton Stres from Slovenia, Nikola Samardžić, H.E.Mr. EldarHasanov, Ambassador of Azerbaijan to Republic of Serbia, prof. Marko Trajković, Mr. Miloš Vulić from the Papal University, prof. Vladimir Dugalić from Croatia, Mr. Petar Petković and Mr. Miro Kovač from Croatia, Mr. Diego Beltrutti di San Biagio from Italy, prof. Dragan Simeunović and prof. Miloš Dimitrijević – among others.

After the Conference ecumenical event The Messages of Peace was held at theArchdiocese of Belgrade when representatives of the religious communities signed a message of peace. Signing of the message was followed by ecumenical prayer at the Church of Christ the King. Representatives of Catholic, Orthodox, Anglican, Calvinist and Evangelical, as well as the Islamic community of Serbia attended. The day after, on Saturday, 10. 11. 2018. a solemn Mass was held at the Cathedral Church of the Blessed Virgin Mary. Mass was dedicated to the victims of the IWW and it was presided by Austrian Cardinal, Archbishop of Vienna Christoph Schönborn. The Mass was attended by Ambassadors of Austria, Hungary, France, Croatia and Great Britain. Archbishop mons. Stanislav Hočevar addressed the faithful wishing a cordial and brotherly welcome to Cardinal Schönborn, brothers Bishops, members of the diplomatic corps, and Serbian Minister for External Affairs Mr. Ivica Dačić.  A press conference was held after the eucharist celebration.

During evening hours, the Cardinal Schönborn, and Belgrade Archbishop mons. Stanislav Hočevarvisited his holiness Serbian Patriarch Irinej who welcomed the guests with the members of the Holy Synod. In the spirit of brotherly love, a dialogue was held about the challenges that are placed before the Christian world and the world in general.