HomeNewsPope at Mass: ‘Without love the Church cannot move or grow’

Pope at Mass: ‘Without love the Church cannot move or grow’ 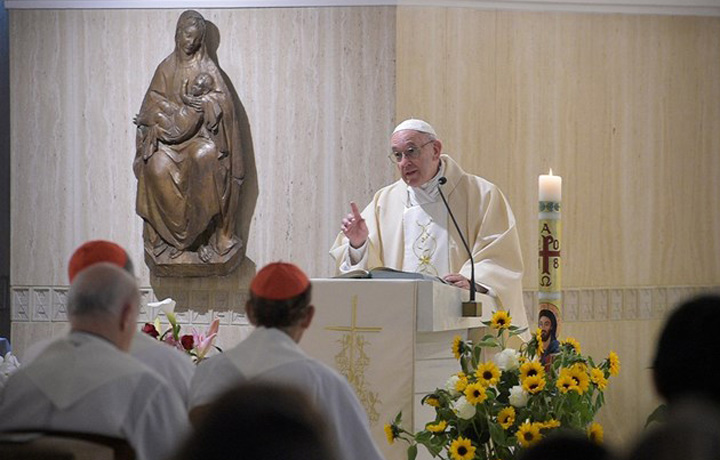 In his homily at Mass in the Casa Santa Marta on Thursday morning, Pope Francis recalls the Last Supper, in which Jesus teaches love in the Eucharist and service in the washing of the feet.

Pope Francis at Mass on Thursday said no servant is greater than the master, reminding the faithful that Jesus left us an example of service and love at the Last Supper.

He was reflecting in his homily on the day’s Gospel, which contains Jesus’ words after the washing of the feet at the Last Supper (Jn 13:16-20).

He said it contains three foundational truths for the Church: Jesus teaches us love through the Eucharist, he teaches us service in the washing of the disciples’ feet, and says no servant is greater than his master.

Jesus, he said, gives his body to eat and his blood to drink in the Eucharist. He also washes the disciples’ feet.

“These two actions reveal two commandments that will make the Church grow, if we are faithful,” he said.

The first commandment is love. The Pope said it is no longer “love your neighbor as yourself”, because Jesus takes a step further, saying “love one another as I have loved you.”

“Love is without limits. Without it, the Church cannot move forward; the Church cannot breathe. Without love, she cannot grow, and is transformed into an empty institution, made up of appearances and actions without fecundity. In his bodily actions, Jesus tells us how we should love, that is, until the end.”

The second commandment, Pope Francis continued, is borne out in the washing of the feet: “serve one another”.

A warning: humility in service

Pope Francis said the third lesson is a warning. “You can serve, but only I send you and give you a mandate. You are not greater than I.” The Holy Father said this is true and simple humility.

“The awareness is that He is greater than all of us, and that we are servants who cannot go beyond Jesus. We cannot use Jesus. He is the Lord, not us. This is the Lord’s will. Giving himself to eat and drink, he tells us to love one another in this way. Washing the feet, he tells us to serve each other in like manner. But beware: no servant is greater than the one who sent him, the master. These blunt words and actions are the foundations of the Church. If we proceed in like fashion with these three points, we shall never fail.”

Pope Francis went on to say that martyrs and many saints acted “with the awareness of being servants.”

At the end of the day’s Gospel, Jesus warns his disciples that there is one among them who will betray him.

So, Pope Francis concluded with an invitation to take a moment of silence to allow the Lord to look at us.

“Let Jesus’ gaze enter into me. We will feel many things: love, maybe nothing… We might feel trapped there or feel shame. But always let Jesus’ gaze in. It is the same gaze with which he looked at his disciples at supper.”