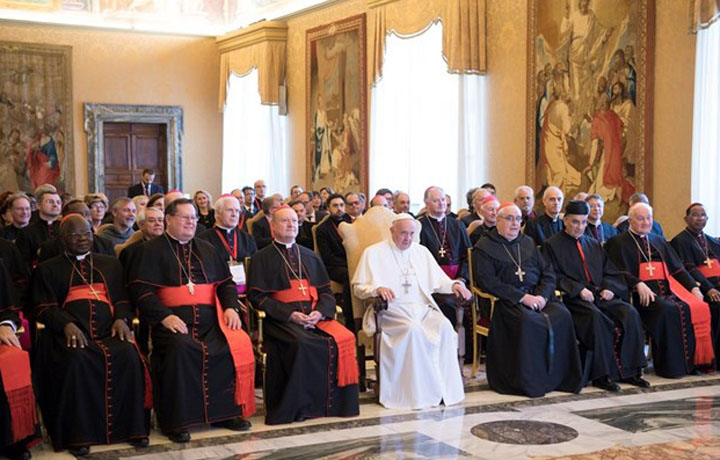 “Science, like any other human activity, has its limits which should be observed for the ‎good of ‎humanity itself, and requires a sense of ethical responsibility,” Pope Francis said on Saturday.  “The true measure of progress, as ‎Blessed ‎Paul VI recalled, is that which is aimed at the good of each man and the whole man,” the Pope told some 83 participants in the plenary assembly of the Vatican’s Pontifical Council for Culture.  The participants met the Pope at the conclusion of their Nov.15-18 assembly which discussed the theme, “The Future of Humanity: New Challenges to Anthropology.”

The Pope said, the Church wants to give the correct direction to man at the dawn of a new era marked by incredible advances in medicine, genetics, neuroscience and “autonomous” machines.  Speaking about the incredible advances in genetics, he noted that diseases that were considered incurable until recently have been eradicated, and new possibilities have opened up to “programme” human beings with certain “qualities”.

Not all the answers

The Pope said that “science and technology have helped us to further the boundaries of knowledge of nature, especially of the human being,” but they alone are not enough to give all the answers. ‎“Today,” he explained, “we ‎increasingly realize that it is necessary to draw from the treasures of wisdom of ‎religious ‎traditions, popular wisdom, literature and the arts that touch the depths of the mystery of ‎human ‎existence, without forgetting, but rather by rediscovering those contained in philosophy and ‎theology.‎”

In this regard, the Pope pointed to two principles of the Church’s  teaching. The first is the “centrality of the human person, which is to be considered an end and not a means.”  Man must be in harmony ‎with creation, not as a despot about God’s inheritance, but as a loving guardian of the work ‎of the Creator.‎

The second principle is the universal destination of goods, including that of ‎knowledge and technology. Scientific and technological progress, the Pope explained, should serve the good of all humanity, and ‎not just a few, and this will help avoid new inequalities in the future based on knowledge, and prevent widening of the gap between the rich and the poor.  The Holy Father insisted that great decisions regarding the direction scientific research should take, and investment in it, should be taken together by the whole of society and should not be ‎dictated solely by market rules or by the interests of a few.‎  And finally, the Pope said, one must keep in mind that not everything that is technically possible or feasible is ethically acceptable.