HomeNewsPope Francis highlights importance of education for migrants and refugees

Pope Francis highlights importance of education for migrants and refugees 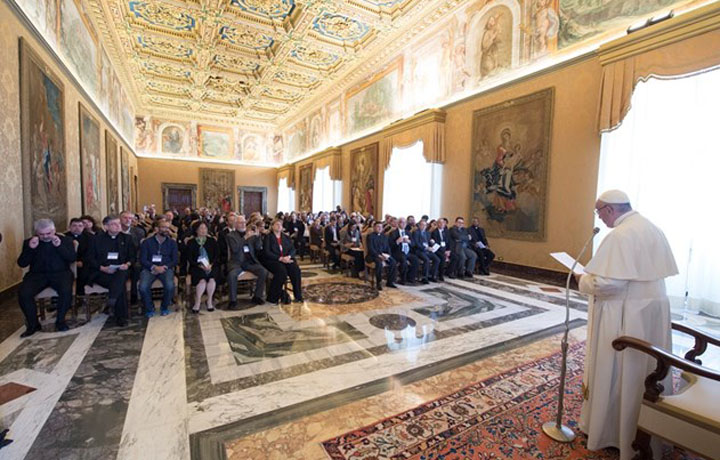 Pope Francis on Saturday addressed members of the International Federation of Catholic Universities at the conclusion of their conference entitled,  “Refugees and Migrants in a Globalized World: Responsibilities and Responses of Universities”.

Addressing the International Conference participants on Saturday in the Vatican the Pope, congratulating them on their work, also pointed out the importance of their contribution in three areas:  research, teaching and social promotion in order, he said, to bring about “the construction of a more just and humane world.”

Reflecting on the theme of their conference “Refugees and Migrants in a Globalized World: Responsibilities and Responses of Universities”, the Holy Father spoke about the need “to do further studies into the root causes of forced migration with the aim of identifying viable solutions…” He also added, that it was equally important to reflect on the negative, sometimes discriminatory, and xenophobic reactions that migrants face in countries of ancient Christian traditions and look also to creating more awareness of this issue.

Pope Francis underlined the contributions that migrants and refugees can make to the societies that welcome them and expressed the hope that Catholic universities would develop programmes that “promote refugee education at various levels, both through the provision of distance courses for those living in camps and reception centres, and through the granting of scholarships that allow for their relocation.”

During his address, the Pope invited Catholic universities to educate their students, some of whom, he said, would be political leaders of the future, entrepreneurs and artists of culture, to study carefully the migratory phenomenon, in a justice, and global co-responsibility perspective.

With regard to the complex world of migration, said Pope Francis, the Migration and Refugee Section of the Dicastery for Integrated Human Development has suggested “20 Action Points” as a contribution to the process that will lead to the adoption by the international community of two Global Pacts, one on migrants and one on refugees in the second half of 2018.

In this and in other areas, he concluded, universities can play their part as privileged actors including the social field, “such as in incentives for student volunteering in programs of assistance to refugees, asylum seekers and newly arrived migrants.”