HomeNewsPope: One should not engage in a dialogue with the Devil, but respond to himwith word of God

Pope: One should not engage in a dialogue with the Devil, but respond to himwith word of God 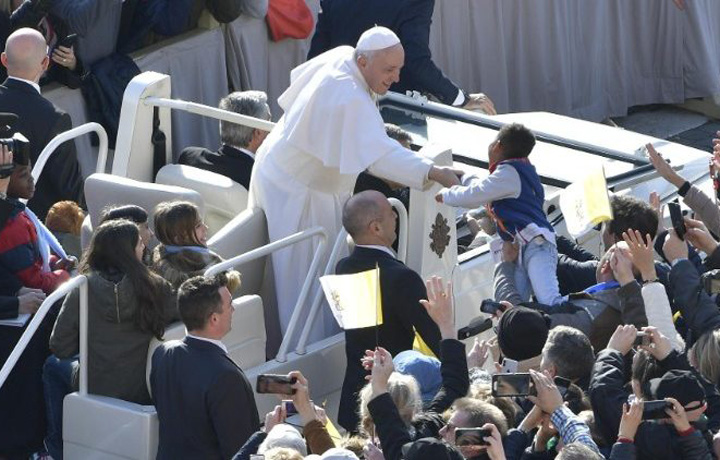 “We mustn’t enter into a dialogue with the Devil, but respond to his temptations with word of God”, said Pope Francis yesterday at St. Peter Square prior to prayer of Angelic salutation, reflecting on the Gospel of the first week of Lent (Luke 4, 1-13) which is about Jesus’s temptations in the desert. “After Jesus had spent 40 days fasting, the Devil tempted him three times”, the Pope said and emphasized that Devil told Jesus to turn a stone into bread (Luke 4,3); then he showed Jesus all kingdoms of the world and promised him to become powerful and famous Messiah (Luke 4, 5-6); and in the end, he led Jesus to the highest point of the Jerusalem temple and told him to throw himself down in order to show God’s strength (Luke 4, 9-11).

“Those three temptations: the greed of possession, human glory and using God point out to three paths that the world always proposes promising great successes”, said Holy father and explained that the greed of possession is always a path of perfidious Devil’s logic. It stems from basic and justified need for food, life, achievement and happiness, in order to lead us to believe that we can have all of this without God and by being against Him. However, Jesus opposed saying: “It is written: Man shall not live on bread alone” (Luke 4,4). Remembering a long journey of the chosen people through the desert, Jesus points out that he wants to succumb to His Father’s providence with his full trust, the Father who always looks after his children.

“The second temptation is a path of attaining human glory”, said Pope Francis and continued, as the Devil said: “If you worship me, it will all be yours” (Luke 4, 7). “One can lose entire personal dignity; can allow to be corrupted by the idol of money, success and power, in order to reach his or her own self-realization. After that, one can enjoy intoxicating joy that soon fades away. That’s why Jesus answered: “Worship the Lord, your God and serve him only” (Luke 4, 8).

“The third temptation is using God for your own benefit”, said the Pope and added that Devil, who quoted Psalms, asked Jesus to request an extraordinary miracle from God but Jesus opposed once again with his firm decision to stay humble and trust His Father as “It is said: Do not put God, your Lord, to the test” (Luke 4, 12). Thus, Jesus rejected perhaps the most ingenious temptation to “get God on our side”, asking him mercies that only serve to satisfy our pride.

Pope Francis says that while those are the pathsthat suggest we can achieve success and happiness using deceit, they are completely foreign to God’s way of acting in reality and in fact separate us from God, as they are Devil’s deed. By facing these temptations, Jesus managed to resist them so as to fully adhere to Father’s will. He showed us how we can do the same: inner life, faith in God and certainty in His love. We can defeat any temptation with certainty that God loves us and that He is our Father.

Jesus didn’t enter into dialogue with the Tempter, but He responds to the Devil with word of God. That teaches us not to engage in a dialogue with the Devil, but to respond tohim with word of God. Therefore, let’s use the Lent as time to purify ourselves and experience soothing presence of God in our lives. May the intercession of our Mother, Blessed Virgin Mary, who is an example of faithfulness to God, support us on our path, helping us to always reject the evil and accept the good, said Pope Francis prior to noon prayer.

“Seminarians Angelo Cuartas and eight martyr friends, who were killed in hatred of the faith during Spanish civil war, were beatified yesterday in Oviedo, Spain,” said Pope Francis after prayer of Angelic salutation and emphasized that “these young candidates to the priesthood loved the Lord to the point of following him on the way of the cross”.May their heroic testimony help seminarians, priests and bishops to remain pure and generous, in order to faithfully serve the Lord and holy God’s people.

In the end, the Holy Father greeted all present pilgrims, especially families, parish communities and associations. He wished that all of us have fruitful Lent path, and he recommended himself and his associates who started their spiritual exercises to our prayers.