HomeNewsPope to Ratzinger Prize-winners: a symphony of truth

Pope to Ratzinger Prize-winners: a symphony of truth 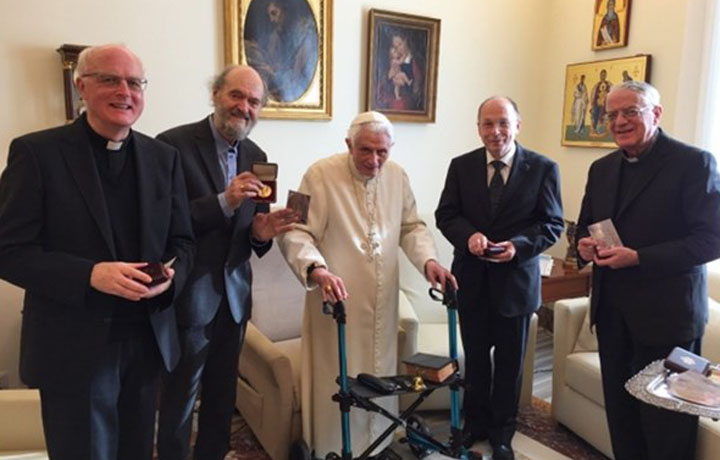 Pope Francis received the recipients of the 2017 Ratzinger Prize in Theology on Saturday morning. Catholic Professor Karl-Heinz Menke of the Theological Faculty of the University of Bonn, Lutheran Professor Theodor Dieter of the Institute for Ecumenical Research in Strasbourg, and Orthodox composer Arvo Pärt, share the Prize this year, which Benedict XVI established in 2010 as the leading international award for research in Sacred Scripture, patristics, and fundamental theology.

Broadening horizons of the Ratzinger Prize

This year, therefore, marks the first time in which the Prize is given to someone not engaged in strictly theological endeavor.

When the prize-winners were announced in September, the President of the Joseph Ratzinger-Benedict XVI Vatican Foundation, Fr. Federico Lombardi SJ, said, “Benedict XVI’s appreciation for the art of music and the highly religious inspiration behind the musical art of Pärt, justified the attribution of the prize also outside of the strictly theological field.”

In remarks to the roughly 200 guests, including the prize-winners and officials of the Ratzinger Foundation on Saturday morning in the Clementine Hall of the Apostolic Palace, Pope Francis said, “I welcomed with joy the idea of ​broadening the horizon of the [Ratzinger] Prize to include the arts, in addition to the theology and sciences, which are naturally associated with it.” He went on to say, “It is an enlargement that corresponds well with the vision of [Pope emeritus] Benedict XVI, who so often spoke to us in a touching manner, of beauty as a privileged way of opening ourselves to transcendence and to meeting God.”

The Prize this year also had an ecumenical element.

In addition to Pärt’s Orthodoxy, the year, 2017, is the 500th anniversary of the beginning of the Lutheran movement in Christianity, and Lutheran Professor Theodor Dieter one of the three recipients.  “The truth of Christ,” said Pope Francis, “is not for soloists, but is symphonic: it requires docile collaboration, harmonious sharing.” The Holy Father also said, “Seeking it, studying it, contemplating it, and transposing it in practice together, in charity, draws us strongly toward full union between us: truth becomes thus a living source of ever closer ties of love.”

Pope Francis concluded, saying, “[C]ongratulations, therefore, to the illustrious prize winners: Professor Theodor Dieter, Professor Karl-Heinz Menke and Maestro Arvo Pärt; and my encouragement to [the Ratzinger] Foundation,” so that, “we might continue to travel along new and broader ways to collaborate in research, dialogue and knowledge of the truth. – a truth that, as Pope Benedict has not tired of reminding us, is, in God, logos and agape, wisdom and love, incarnate in the person of Jesus.”