HomeNewsThe Pope: Don’t forget what the Lord has done in your life

The Pope: Don’t forget what the Lord has done in your life 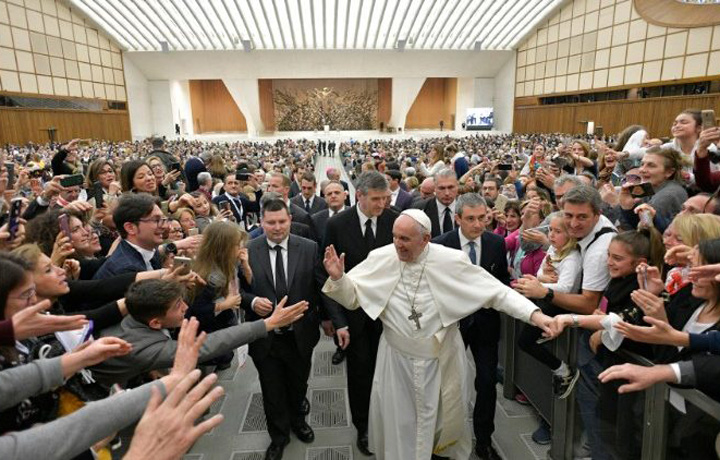 “When a person turns away, he/she loses direction”, Pope Francis said yesterday at the Mass in Casa Santa Marta, focusing on the first reading of today’s mass, taken from the book of Deuteronomy (Deut. 30, 15-20). It refers to a part of Moses’ speech which he used to prepare the people for entering the Promised Land, placing them before a challenge of choosing between life and death. “That is an appeal to our freedom”, Pope Francis said and emphasized that “Three Moses’ thoughts are important:  the first: ‘if your heart turns away’; the second: ‘and you are not obedient’; and the third: ‘if you are drawn away to bow down to other gods and worship them’.”

Pope Francis said: “When a heart turns away, when it decides to take a wrong path, it loses its direction and compass that are needed to go forward. He emphasizes that ‘a heart without a compass is a public danger for the very person and others’. “The heart decides to take that wrong path when it doesn’t listen, but it allows to be led astray by gods, and becomes idolater. There are a lot of people who are deaf in soul. Even we become deaf in soul at certain times; we don’t listen to the Lord, and false Gods call us to idolatry. That is a danger we face on the path towards land which is promised to all of us, the land of encounter with Jesus Christ.”

“Lent helps us to follow that path”, the Pope said and he added that “we lose our memory by not listening to the Lord and disregarding promises that He gave us”.“When we lose a memory of great things that the Lord has done in our life, our Church, our people, we get used to being reliant on our own strength and self-sufficiency.” Therefore, the Pope encouraged us to start the Lent by asking “a grace of memories” and warned us again about Moses’ speech with which he advised people to remember the entire way along which the Lord led them, once they arrive in the Promised land, as we might lose the memory of it once we are fine, when everything is within our reach, when we are spiritually fine.

“There is a danger of losing a memory even in spiritual well-being”, Holy Father said and added “we are feeling fine, then we forget what the Lord has done in our lives, all graces He gave us and we believe it is our own merit and go on with this belief”. “This is where a person starts to turn away as he/she doesn’t listen to the voice of their own heart. We need a grace of memories.” Recalling a passage from the Letter to the Hebrews, which follows the same pattern and which encourages remembering ‘first days’, the Pope said that “losing memory is very common thing’.

“The Israelites lost their memory, as they recalled what was convenient for them at the time, and they didn’t recall anything that threatened them”, Pope Francis said. He noticed that the people remembered that God saved them while being in the desert, they couldn’t forget that. “However, it started to complain about lack of water and meat and think about all things they had in Egypt. It is a selective memory, as they forgot they ate all these things in slavery. We need to emphasize a call to preserve memory that places us on the right path.

“We have to remember in order to go forward and we mustn’t lose history of salvation, history of our life or history of Jesus and us”, Pope Francis said. He also warned that “we mustn’t stop and go back, or let to be astray by idols”. “Idolatry isn’t just going to pagan temple and worshipping a statue. Idolatry is a heart’s attitude when you prefer something as it is more convenient for you, to our Lord whom you forgot.”

“At the beginning of Lent, it will do all of us good if we ask for a grace to keep a whole memory of what the Lord has done in our life and how He loved us. We need to go forward from that memory. It will do us good if we continuously repeat the advice of Saint Paul to his beloved disciple Timothy: ‘Remember Jesus Christ, risen from the dead’. I repeat: “Remember Jesus Christ, risen from the dead who has accompanied me up to now and will accompany me until the moment when I must appear before Him in glory”. May the Lord give us the grace to preserve the memory”, the Pope concluded.