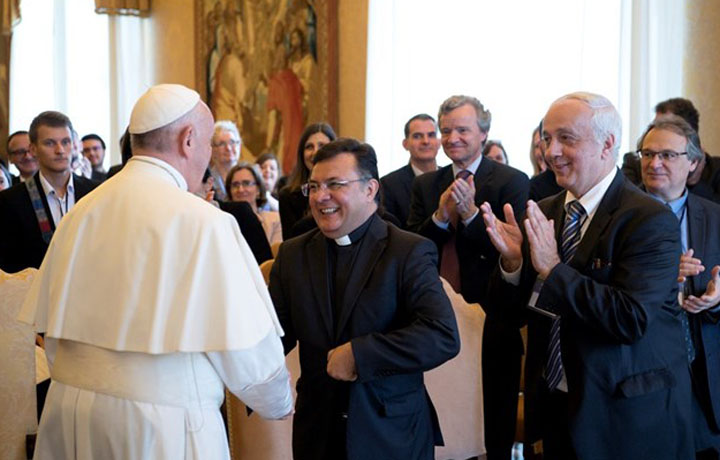 One of the organizations represented at this week’s conference at the Pontifical Gregorian University on the role and the responsibility of universities and educators in offering help – and hope – to the growing numbers of migrants and refugees was The University of the People.

And together with other conference participants, Shai Reshef, President of The University of the People, was also at the audience with Pope Francis on Saturday morning in the Vatican.

During that audience the Pope praised the commitment and the work of those present at “Refugees and Migrants in a Globalized World: Responsibility and Responses of Universities” conference and spoke of the need for “distance courses for those living in camps and reception centres” which happens to be one of the main missions of the The University of the People as Shai Reshef explained:

“The University of the People is the first non-profit, tuition-free, accredited, online University for students who graduate from high school, are qualified for higher education  but cannot attend higher education, either because they don’t have the money, either because they live in places where there aren’t enough universities, or they are deprived for political or cultural reasons such as refugees, women in some cultures… to all these people, we bring – through the internet – tuition-free  university to enable them to get higher education, a better future for themselves, for their families, for their societies and hopefully for the world as a whole” he said.

Shai Reshef says that currently The University of the People counts over 10,000 students from countries from across the globe – many of them from Syria.

He describes the just ended conference in Rome as focusing on a very important aspect of the migration and refugee topic and said that bringing together different universities that deal with the issue of providing education to displaced people is the first of its kind giving life to an extremely relevant conversation.

“We were very fortunate to be encouraged by the Pope who met with us” he said.

“The people who came to the conference, Reshef pointed out, are the ones  who believe in this goal of building a better future for all by providing access to education”.

Look at the Syrian refugees for example: “there are 200,000 Syrians who are left out of higher education” because of reasons caused by the conflict in their nation.

“If each university in the world would take ten Syrians – that’s not a lot. We can accommodate all of them!” he said.

Reshef said that at The University of the People “we are already doing it. We have taken over 1000 refugees and over 600 Syrian refugees. But each university could afford to take ten refugees  and that’s basically what the Pope said: think about these people and see how you can address this issue”.

He said he is in total agreement with the Pope’s belief that this is a global co-responsibility and described Pope Francis as “a champion of resolving the issue and understanding that it is not ‘their’ problem: it’s ‘our’ problem”.

He pointed out that from a pragmatic point of view you can look at the issue not just as a human rights cause, but understanding that “if it is not resolved these people will continue to be miserable and being miserable  means not only that they will not be productive members of society and are going to suffer, but the consequences of this we all are going to bear” he said.

“If these people have hope probably they will behave differently” he said.

He said that if you take people who strive for opportunity and you give them opportunity, they will go a long way and hopefully be builders of a better world.

Reshef said the conference contained promise for the future and it reinforced his belief that ‘on-line’ tuition is assuming a more and more important role in the discussion of the solution.

On-line is what can be relevant and offer a solution to every person he pointed out.

Concluding, Reshef specified that while the University of The People is tuition-free it is not free as fees are requested for exams unless the student cannot afford to pay; in that case (as often is the case for refugees and migrants) scholarships are offered.

Finally he said: “For me to shake the Pope’s hand and receive – as the University of the People – his blessing, was a very exciting moment and I am very happy to have it”.

For more information on The University of the People: www.uopeople.edu