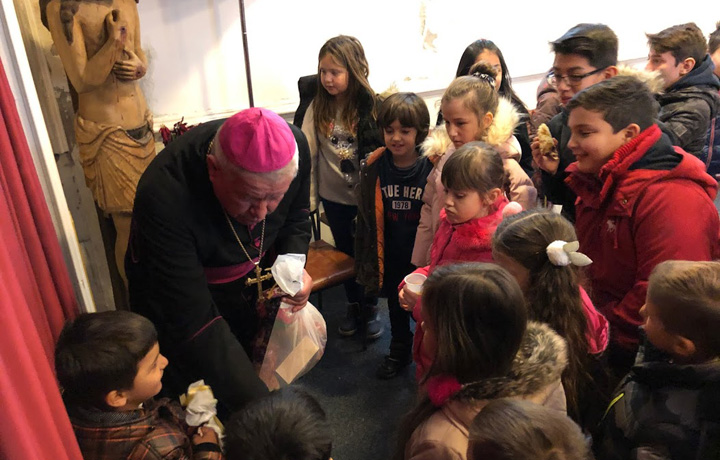 Belgrade Archbishop, Monsignor Stanislav Hočevar visited Niš where he concelebrated the Mass, on the vigil of feast of the Epiphany – the feast of Three Kings on January 5th.

A lot of believers gathered in the parish church of the Exaltation of the Holy Cross in Niš where it was particularly nice to see a lot of children and the youth between them. As every year, during the feast of Epiphany, water was blessed which will be used for blessings throughout year.

In his sermon, the Archbishop, looking back on the role of the Wise men who came from the East to bow down to a newborn King, underlined the importance of observing signs in time, as those back then which were recognized by the Wise men, as well as  those signs that God send us daily in our present. ”We, the Christians, are asked on a daily basis to be apostles of peace, evangelists of joyful news of salvation and love by which God merely touched our hearts, giving us His Only Son to take part in our journey on the Earth. Therefore, it is very important and significant that by observing the signs in our time, as the Wise Men used to do, we know how to testify our faith by God’s love and to be a star which shows the right way to all people around us in the present”, the Archbishop Hočevar said.

After Holy Mass, as a part of Spanish people’s tradition, a short play was performed which presented parts from Incarnation until Epiphany and giving gifts to a newborn Christ. The play was accompanied by a children’s choir which sang certain Christmas songs. According to the tradition, Three Kings didn’t only bring gifts to a newborn baby Jesus, but to all children in this parish.

Prior to this, His Excellency Archbishop met with the Most Reverend Bishop of Niš Mr Arsenije in the eparchy house. These two brothers in episcopate, in a pleasant conversation, exchanged experiences and problems that two sister Churches face nowadays and they seized an opportunity to express their wishes to each other on the occasion of the most joyful feast  of the entire Christian world – Christmas.