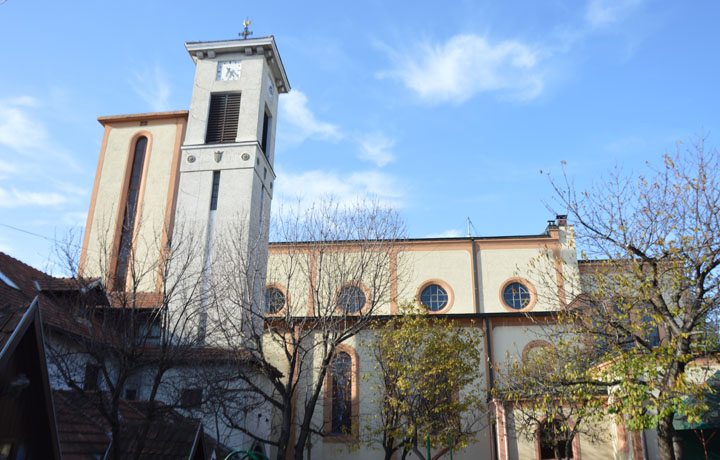 Parish of the Assumption of the Blessed Virgin Mary is located in a part of the city called Neimar, and the parish church is in 75 Hadži Milentijeva Street. Besides that part of city, the parish includes Voždovac, districts Braće Jerković and Medaković as well. The borders of the parish have frequently changed and intersected with the neighboring parishes. At the time of its establishment it was entrusted to the monks, the Assumptionists. On 8 December, 1924, they asked the then Archbishop Rodić to establish their own monastery and a separate convent for sisters Assumptionists. They repeated their request on 2 January, 1925. The Archbishop gave his consent on 6 January 1925 (no. 12/1925). The monks asked their administration to build a small chapel for believers, as well as an administrative building for a new parish that was to be established. Ministry of Religious Affairs accepted establishment of the parish by the act VK no. 507/28 II 1927, although it had already declared on the matter with the act VK no. 6579/26 dating from 3 January 1927. There was a difficulty in appointing the parish priest, since the parish was given to the French Assumptionists, the French. But even though they were foreign citizens, everything was quickly settled. The Archbishop appointed Privat Bellard as the first parish priest on 15 February 1927 (no. 81), and Christim Monnier as the first chaplain. The borders of the parish had been determined even earlier by decree no. 636 dating from 12 December 1926. The Holy See handed permanent administration of the parish to the Assumptionists, according to the royal edict no. 2209 since 18 October 1929. Building of the temporary church, pastoral office and a convent began in 1924. The church was built in 1925. Its foundations were blessed by the first Apostolic Nuncio in Belgrade, Hermengildo Pellegrinetti. The church was blessed by then Apostolic Delegate in Bulgaria Roncalli, future Pope John XXIII, during his visit to Belgrade on 25 September in the same year. The new church was called “French” church due to presence of the French Assumptionists.

The first baptism was recorded on 15 February, 1927. After that, there were between 150 and 200 baptisms a year from 1928 to 1938. The old bell tower was built in 1930 and a year later, Archbishop Rodić blessed three bells that were cast in Savoy, in Paccard factory, where the bells of Church of Sacred Heart of Jesus in Montmartre were cast, as well as the bells of the Endowment of King Peter in Oplenac. The biggest bell bears the name of St. Mary and it is a gift from King Alexander, the second largest has the name of St. Peter and it’s a gift from the Holy See, and the smallest is named after St. Anne and it is a gift from the parishioners of this parish.

The construction of a new church, conceived as a “memorial church” to French and Serbian soldiers who died on the Salonika front, started in 1938. Due to the World War II and its consequences, interruption of construction work lasted more than forty years. During that time, the church was used to record shows of Radio Belgrade, due to its good acoustics. Later it served as a medicine warehouse.

After the Assumptionists’ departure on 1 September, 1982, Anton Hočevar, who was the parish priest of the parish Christ the King, took over looking after believers and further construction of the church, along with his chaplains Antun Pečar and Zvonko Blaško.

Upon the arrival of a new parish priest, Jože Hauptman, planning and completion of interior and exterior part of the church was initiated, according to designs of Slovenian architect Kvaternik.

A wall behind the altar was painted with frescoes by Slovenian painters:  Čemažar and Lucijan, in 1987. The frescoes are inspired by an idea of ​​intertwining of East and West in our region. The Virgin, who is depicted two times in this room, occupies the central, spherical part. In the lower part, the Virgin is represented on catafalque as if asleep, according to tradition of the Eastern Church (Dormitio), surrounded by the twelve apostles, while in upper part of the same fresco, in the manner of Western European Marian iconography, her Assumption (Assumptione) is represented, based on a belief in the Virgin Immaculate Conception, where she was crowned with twelve stars. This central fresco of the church and parish patron is surrounded by saints’ frescoes. St. John of Capistrano, St. Nicholas of Flue and St. Cyril of Alexandria are shown on the left (north) side, and St. Cyril and Methodius and Orthodox saint St. Sava are shown on the  right (south) side. In upper zone, above the Mother of God, there is a scene of Christ Pantocrator who is blessing and the Holy Spirit presented in a form of a dove, and they are surrounded by heavenly host of angel musicians who are welcoming the Queen of Heaven. The scenes in lower zone remind of war sufferings: there is as a mother who is bending over a wounded child on the left, and on the right we can see two women who are praying for peace.

New church was consecrated, now as a cathedral in honor of the Assumption of the Blessed Virgin Mary on Sunday, 14 August 1988. Thus, Belgrade Archdiocese got a new, worthy cathedral instead of the old one– Christ the King. Consecration was done by Franc Perko, the Archbishop of Belgrade. The monastery, which is located in the parish’s courtyard, parish office and hall were renovated in 1989 for spiritual exercises and were given a new name – Home of St. John of Capistrano, after the saint who has liberation of Belgrade from the Turks to his credit. In addition to this, his character is now in the presbytery of new cathedral.

There is a crypt below the cathedral, which has been used as a small chapel for everyday liturgical ceremonies since 1986.

The old church was remodeled as a room for pastoral encounters in 1994.

Franc Perko, the Archbishop of Belgrade, blessed a new organ on 24 September 2000, which was obtained thanks to Anton Hočevar, who was the then parish priest of Christ the King church. “New organ has an excellent basis for producing sound combinations so that this instrument can gloriously participate in accompanying Liturgy, choir, soloists, solo instruments, and it is adequate for concert performance of old, baroque, and  music of the new century” said Prof. Andrija Galun. The instrument was made by a famous Italian company Francesco Zanin from Codroipo near Udine and it has 49 registries, three manuals, pedal, crescendo for the whole organ, mechanical tracker with electronic memory for registration etc.

The first deacon’s laying on of hands in the Cathedral was granted on 8 September 2000 to Goran Avramov from Belgrade, who was ordained a priest a year later.

This parish and the cathedral represent venues of all major liturgical gatherings and events: pilgrimages, laying on of hands, concerts etc.

Jože Hauptman, former parish priest said: “… Therefore, it was a great joy to have an opportunity to take part in designing the interior of our Cathedral in Belgrade. I’m glad when I hear that some of the believers see the cathedral as a sign of communion that through the Archdiocese becomes true with whole Church. A lot of old and sick people have repeatedly confided in me that they show their frailty and illness to meet the needs of our cathedral celebration. I see that this awareness of belonging to the Church as a family, and symbolically the cathedral mostly points out to that, is increasing from year to year.

The cathedral provides us precisely with that possibility: to be open towards everyone! We arranged a cooperation and organization of organ concerts and organ school. I am glad to see when many people from fraternal Orthodox Church and other cultures fill the church. … Kindergarten has its history and the more years pass by, the more I see a golden thread of God’s providence which leads and directs us.

I don’t see the future of the parish as a community which was established by a decree, but as Jesus’ live presence, the one that He promises where two or three are gathered in His name. This very presence specifies an inscription on one of the bells: Vocem meam audient et Fiat unum ovile et unus pastor (‘They will listen to my voice and there shall be one flock and one shepherd’). I can already see that many of those who are not ’ours’ make themselves at home in our cathedral.”

Cathedral of the Assumption of the Blessed Virgin Mary