THE OLDEST PARISH IN BELGRADE

PARISH OF CHRIST THE KING

History of the parish 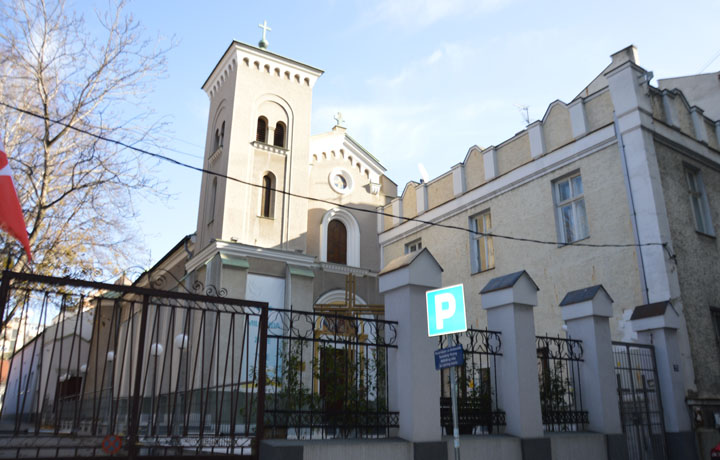 Christ the King is the central and the oldest parish in Belgrade and in Belgrade Archdiocese. Until recently, it was also cathedral parish, i.e. church.

Its beginnings date back into the mid-19th century, although it only existed as a “mission” at that point… pastoral care without legal status, because at that time, there was neither a bishop nor a diocese in Belgrade, neither church-temple, although there were a lot of Catholics.

Baptismal register, register of deaths and marriages began to be recorded in 1845, and now they can be found in Belgrade municipality of Vračar.

Negotiations between the Holy See and Serbia regarding regulation of legal position of the Roman Catholic Church and its believers in new principality i.e. kingdom of Serbia were led for more than 60 years.

When the negotiations were finally completed by signing the Serbian Concordat in 1914, the First World War broke out and prevented its realization: restoration, i.e. the establishment of Belgrade-Smederevo Diocese/Archdiocese-Metropolitanate and first parishes. This was possible to realize only after the end of the War in 1918 and upon formation of a new country – the Kingdom of Serbs, Croats and Slovenes (SCS) and Yugoslavia.

Pope Pius XI appointed Nuncio Pellegrinetti after 6 years, on October 29th 1924.  Then, on December 7th 1924, the Pope consecrated and appointed the first Archbishop of Belgrade-Smederevo and that was Fr. Ivan-Rafael Rodić, former apostolic administrator of Banat, in a single church-chapel for Catholics in Belgrade, which was located within buildings of Austro-Hungarian consulate located in today’s building and church-temple of Christ the King. Those buildings were purchased for the archbishop’s residence and the parish, thanks to financial support of the Holy See and the Yugoslav government, then thanks to understanding of the Austrian government and with mediation of Nuncio and Austrian ambassador in Belgrade.

This small church-chapel, 15 meters long and 9.5 meters wide, built of solid material, dedicated to St. Ladislav, became the first parish church and a temporary cathedral. In 1926, it was enlarged to present scale by building additional side entrances, choir and bell tower, and on the feast of Christ the King it was dedicated to new patron saint, Christ the King. With further remodeling and renovations, it remained in such state until August 14th 1988, until consecration of a new cathedral-church of the Assumption of the Blessed Virgin Mary in Neimar. It was renamed co-cathedral since then. A church hall was built next to it, as a gift from Pope Pius XI to Belgrade’s youth, due to Nuncio Pellegrinett’s advocacy. Then, new bells were purchased and blessed, and on December 15th 1927 music was heard from an organ, the first one in Serbia, made by the company F. Jenko from Šentvid near Ljubljana. It is still played on today.

Three parishes were established in Belgrade: Christ the King, St. Anthony and Assumption of the Blessed Virgin Mary (1926-1927) after restoration, i.e. the establishment of the (Arch)Diocese and appointment of first Archbishop (1924). Dr. Vjekoslav Wagner (1927-1932) was appointed as the first parish manager of parish Christ the King. Msgr. Wagner was succeeded by Đakovo priest Dr. Matija Petlić (1932-1959). During their administration of the parish, religious life was flourishing and number of believers was increasing every day, since there was a baptism in the parish almost every day and a wedding every two days.

Msgr. Alojz Turk (1959-1964), later Archbishop of Belgrade (1980-1987), took over management of the parish from Msgr. Petlić. He was succeeded by Dr. Anton Hočevar (1964-1966), former parish priest from Kragujevac, who began remediation, insulation, renovation and expansion of the house, the church, the sacristy and the hall, along with new Archbishop Dr. Gabrijel Bukatko (1964-1980), who came after death of Archbishop Dr. Josip Ujčić (1936-1964). This work would be continued, expanded and completed by a new parish priest Ciril Zajec, a Salesian (1966-1971).

According to provisions of the Second Vatican Council (1962-1965), the church was renovated and adapted to new liturgical rules: main altar was moved to face people and the archbishop’s throne was set up – a seat with the eastern coat of arms of Archbishop Bukatko, placed in a mosaic with his motto “Follow the Virgin Mary towards Christ”. It was written in old Slavic language, since he was the bishop of Greek Catholic rite and served Greek Catholic communities in Yugoslavia (whose seat was in Križevci, near Zagreb), and later he became the Archbishop of Roman Catholics in the Archdiocese of Belgrade and apostolic administrator of Banat. There are additional seats (benches) on both sides of the throne, and in side aisles there are side altars with tabernacles, pedestals, statues of the Immaculate Conception and St. Joseph and a baptistery as well. Everything is made of Carrara and domestic marble, which lines walls of the church up to a height of 1.8 meters. There is a large semi-oval mosaic of Christ the King in the apse, above the throne. Symbols of seven Sacraments are placed in the front, and His little mosaic is placed above the entrance. Stained-glass windows display main details of Jesus’s life, the Blessed Virgin Mary’s life and life of the Church as well. They also display religious life according to Christians’ truths, God’s commandments and commandments of the church. Renovations were performed and guided by prominent Roman artist Prof. Augusto Ranocchi. The Stations of the Cross, carved in oak, are work of a Belgrade artist. There is a tomb of Archbishop Ujčić in the right niche of the shrine to the sacristy.

After Rev. Ciril, the parish was administered by another Salesian, Rev. Herman Habič (1971-1974). In 1974, the administration of the parish was taken over by Dr. Anton Hočevar, a parish priest from Kragujevac, who managed it until his death in 2002. Then, the parish of Christ the King was temporarily taken over by his chaplain – parochial vicar, ordained priest Goran Avramov, until August 17th 2003 when Msgr. Dr. Marko Čolić, former parish priest in Bor and administrator of the parish in Zaječar, became its parish priest. Rev. Goran Avramov remained his chaplain, parish vicar, assistant and deputy until his departure to Aleksinac in 2004. Rev. Andrej Đuriček was new parish vicar from 2004 to August 2007.

At the same time, Msgr. Dr. Marko Čolić left pastoral service, and Rev. Dr. Milutin Novaković took up his position. He stayed there until March 2008 when responsibility for this parish was taken up by Rev. Stjepan Barišić, who had served in Smederevo up to then.

As the central parish, Christ the King has maintained some distinctive features such as masses for diplomats, religious education for their children, various religious, interfaith, social and charity encounters. These activities are being continued, with the tendency of expansion and growth.

Future plans are self-evident and include preservation and improvement of current situation, bigger concern for the young who are future of the Church and the society, deeper understanding of faith through the Bible and celebration of liturgical acts, because it leads to a better understanding of the Savior, who gathered the dispersed, looked after the collected and expanded the founded.

Church of Christ the King