Franciscan parish and monastery in Belgrade

PARISH OF SAINT ATNONY OF PADUA

Establishment of the parish 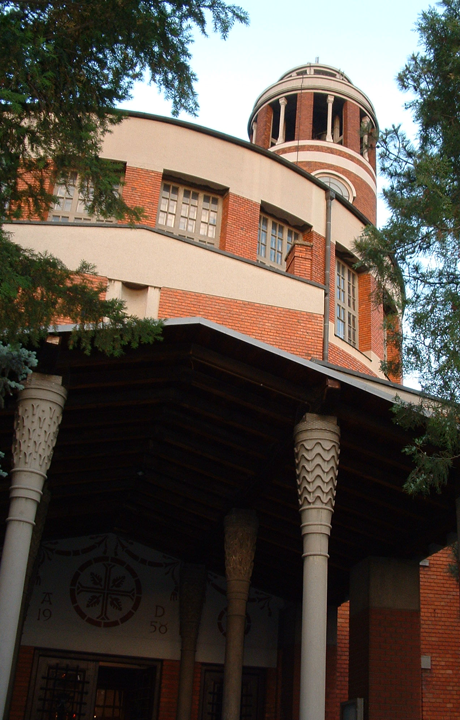 This monastery and parish church belongs to the Franciscans of Province Bosnia Srebrena. The Franciscans were mentioned in this area back in the 15th century. One of their monasteries was devastated by the Turks in 1521, and the other was barbarically destroyed in the 17th century. In 1727, they built a church and a monastery under the protection of St. John Capistrano which they had to leave and move to Zemun due to Turkish siege on September 18th 1739.

At the invitation of the Archbishop of Belgrade and Smederevo, Rafael Rodić, the Franciscans returned to Belgrade in 1926 and bought land between Bregalnička and Pop Stojanova Street.

The construction of the monastery began on August 3rd 1926. It was finished on November 16th and it was blessed on December 17th in the same year.

The construction of new church began in 1929 according to designs of a famous Slovenian architect Jože Plečnik (1872-1957) who was invited by then parish priest Grgić, acting on a sculptor Ivan Meštrović’s proposal.

New church was consecrated on December 8th, 1933, on the Feast of the Immaculate Conception.

After Plečnik’s death in 1957, guidelines for further construction were taken over by his pupil, architect Valentinčić.

The church was consecrated by then Archbishop of Belgrade Gabrijel Bukatko on May 2nd 1962.

Parish registries have been kept since February 20th 1921 when the first baptism was performed.

Between the wars, there was a Home of the Sisters of Charity of St. Vincent de Paul, a Home of school sisters, as well as the Third Secular Order of St. Francis in the parish. There were also two lay Catholic organizations: The Guard of Honor of the Sacred Heart of Jesus and St. Anthony’s Bread.

School sisters and Sisters of Charity of St. Vincent de Paul managed a school, a kindergarten and a boarding school in the parish. Nowadays, only Little Sisters are active.

Devotions of 13 Tuesdays in honor to St. Anthony are irreplaceable, as well as the Triduums of St. Anthony and St. Francis.

The church of St. Anthony is 52m high and it was built in the form of rotunda. Ground plan of the church resembles the statue of St. Anthony with the baby Jesus in his arms.

There are three large niches where side altars, confessionals and chapel are placed, on both sides of the central axis of this circular building.

There are two galleries white fences above the ground floor. Choir and organ are placed on the first gallery.

A large crucifix stands over a curved concrete beam above the shrine atrium.

Dark color of uncovered facade bricks, out of which the wall is built, quite dark marble floor and wooden ceiling are illuminated by the light that enters the interior of the church through windows placed around entire church.

The bell tower is 52 meters high, and the height of the church is 25 meters. A white steal cross of 3.70 meters is placed on the top. The bell tower is slightly tilted so that it represents a unique sight.

Large or main altar is made of shiny black marble, which is dappled with white stripes. It was perceived in two dominant directions: horizontal direction is emphasized by the stairs and the altar table, and the upright one – by the Eucharistic house on several levels. At the bottom of the house, there is a lavishly treated tabernacle then space for exhibition of the Blessed Sacrament, and there is a closed construction that ends in a pyramid-shaped roof above it. After the Second Vatican Council, another altar was placed in front of altar stairs in order to enable a new way of celebrating the Mass.

The statue of St. Anthony is placed on the wall above the main altar and it is a work of the sculptor, Ivan Meštrović. It is made of bronze and is 2.75 meters tall. It was placed there in 1955.

The statue of the Sacred Heart of Jesus is placed on the side altar and it was made by Ljubljana-based artist Božo Pengov and according to Jože Plečnik’s plan.

The statue of Mary, which is also made by Božo Pengov based on Plečnik’s designs, is placed in the Lady’s altar. The statue was placed so as to be on almost same level with the viewer. Our Lady is very unusual in her eastern character as well as in treating of some iconographic elements (e.g. the snake).