MSGR. STANISLAV HOČEVAR, THE ARCHBISHOP AND METROPOLITAN OF BELGRADE

Msgr. Stanislav Hočevar was born on November 12th, 1945 in a village Jelendol, a parish and municipality Škocjan near Novo Mesto, the Diocese of Novo Mesto, Slovenia. After completing primary school in Škocjan, he joined the Salesians of Don Bosco in 1960. He attended grammar school in Križevci and Rijeka, and then he entered the Salesians’ novitiate. He served in the Army in Skopje from 1966 to 1967. Then he was an educator in the novitiate in Želimlje near Ljubljana. He studied theology at the Faculty of Theology in Ljubljana. He was ordained as a priest on June 29th, 1973. 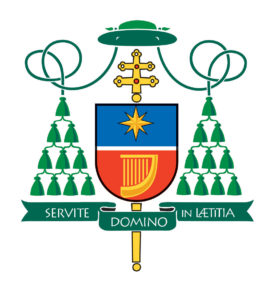 He was a deputy Salesian Provincial in Slovenia for two years (1982-1984). Then, he was a director of a boarding school for high school students – Modesto’s home in Klagenfurt, Austria for four years. He was elected Provincial of the Salesians in Slovenia for the first time in 1988, and he was entrusted with his second term in the same department from 1994 to 2000. He took part in four General Meetings of the Salesians in Rome. He was the President of Conference of Major Religious Leaders of Slovenia in two terms, and then he was the Secretary General of the same conference for two years.

Even with these demanding responsibilities and duties, he found time to write. His booklet Peter s Poljske was published in 1978, Odpri srce in 1983,  Veliko znamenje – readings for May devotion in 1988, and in 1998 he was the editor of Leta velikog dozrevanja, a book about all victims of the Second World War in the local parish in Škocjan, near Novo Mesto.

During the bombing of Yugoslavia, in 1999, he started the initiative “Peace to you, Balkan” and in the same year he established a successful foundation to help multiple-child families named Anna’s Fund. Pope John Paul II appointed him the Coadjutor Archbishop of Belgrade on feast of the Annunciation on March 25th, 2000. He received Episcopal ordination in the church of Our Lady of Help in Rakovnik, Ljubljana, on May 24th, 2000. He came to Belgrade on Pentecost in 2000. At the plenary session of the Bishops’ Conference of Yugoslavia in 2000, he became responsible for catechesis, the youth and monastic life, and he also became the president of the Bishops’ Commission for Caritas.

Holy Father John Paul II accepted the request for dismissal of the former Archbishop of Belgrade Dr. Franc Perko on March 31st, 2001, and with this Msgr. Stanislav Hočevar takes over the position of the Archbishop and Metropolitan of Belgrade.

On April 16th, 2001, he was elected President of the Bishops‘ Conference of Yugoslavia, later renamed the International Bishops’ Conference of St. Cyril and Methodius, where he also performed other functions, and he was entrusted with another five-year term on June 7th, 2006, at XVI Plenum in Petrovaradin,.

He became a member of the Pontifical Council for Promoting Christian unity in 2002. There is a star and a harp on the bishop’s coat of arms which belongs to Msgr. Stanislav Hočevar. The star indicates transcendent dimension of human life, and therefore symbolizes Church and the Virgin Mary; the harp is an instrument that speaks of harmonious unity, and symbolic number seven represents sacraments of the Church. These symbols indicate light and hope that Christianity brings. The colors on the background of the coat of arms are typical Slovenian colors.

Motto of his Episcopal vocation is: Servite Domino in laetitia (meaning: Serve the Lord with joy). 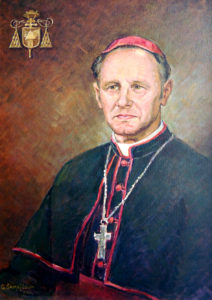 He was appointed as the Archbishop and first Metropolitan of Belgrade on December 16th, 1986; then he was sanctified by the John Paul II on January 6th, 1987 in Rome. He took over the Archdiocese of Belgrade on February 15th, 1987. He became a member of the International Catholic-Orthodox Theological Commission in 1991. He was elected as the first president of the Bishops’ Conference of Yugoslavia after its establishment in 1997.

Archbishop Perko was one of the pioneers of the establishment of fraternal relations between The Faculty of Orthodox Theology of the Serbian Orthodox Church in Belgrade and the Faculty of Theology in Ljubljana, which was crowned with ecumenical encounters between three theological faculties in former Yugoslavia (in Belgrade, Zagreb and Ljubljana). Those ecumenical encounters began in 1974 and they were held by each of the faculties every two years. He was an active participant in those symposiums until last meeting in 1990.

A period from 1990’s to breakup of Yugoslavia was particularly delicate for his vocation. Despite troubles he was faced with, he persisted in being prepared for a dialogue even with his opponents. He got a particularly significant role within established Bishops’ conference of Yugoslavia (subsequent Serbia and Montenegro) in 1997. He participated in the Synod of Bishops in Rome, in 1998. He was present during bombing of Belgrade, i.e. Serbia and Montenegro (as well as when the Holy See opposed this act committed by the NATO, under name “Angel of Mercy”). Due to his poor health, he was retired. He lived in his home country Slovenia afterwards, until his death on February 20th, 2008. 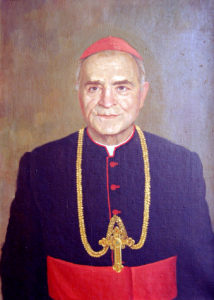 He was born in Bršlin, near Novo Mesto in Slovenia, in 1909. He studied at the Faculty of Theology in Ljubljana. He was ordained as a priest in 1934. During his studies, he became interested in problems regarding Christian unity. He participated in International Congresses dedicated to Saints Cyril and Methodius as well as in several Slavic congresses.

After his ordination as a priest, he was invited to the diocese of Skopje by bishop Gnidovec, where he dwelled in different places within the diocese since 1934. He was entrusted with editing a magazine “Blagovest” in January, 1935.

During Second World War, he was a military priest. He was appointed Vicar General with special authorizations for a part of the diocese under Bulgarian occupation in Skopje, in 1944. He had to return to Slovenia in 1955. He was in Belgrade since 1959, where he helped parish priest in parish Christ the King. He became editor-in-chief of magazine “Blagovest” in 1964. He also had other important responsibilities. He maintained friendly relations with Serbian Orthodox Church and its institutions. He took part in all ecumenical symposiums.

He was appointed as the Archbishop of Belgrade on March 7th, 1980 and he received episcopal consecration on April 20th. The Pope appointed his successor in 1986. He retired to Slovenia and he spent the rest of his life in Novo Mesto, where he died in 1995. 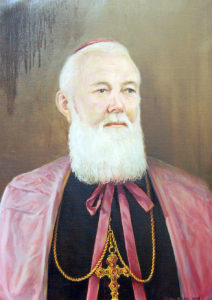 He was born in Donji Andrijevci, near Slavonski Brod in Croatia, in 1913. He came from the eparchy of Križevci, which gathered all Greek Catholics in Yugoslavia at that time. He finished grammar school at the Franciscans in Visoko, and Faculty of Theology in Rome, where he earned his PhD.

He was also a Bishop’s secretary in Križevci and with the course of time he became a canon. He was appointed as apostolic administrator of the Greek-catholic eparchy of Križevci in 1950. He received episcopal consecration in 1952. He was a secretary of the Bishops’ Conference of Yugoslavia for 10 years. He was appointed as the Archbishop Coadjutor with rights of succession in 1961.

He became the Archbishop of Belgrade after Josip Ujčić’s death in 1964. He faced a difficult economic situation as well as a lack of priests in the Archdiocese, which he wanted to overcome as his primary task. He worked devotedly to ensure that provisions of the Second Vatican Council come to life in his diocese too.

He managed to establish exemplary relations with the Orthodox Church in Serbia. During that time, in 1966, diplomatic relations between the Holy See and Yugoslavia were restored, which made his mission easier.

He handed in his resignation due to poor health and according to canon law in 1980. Then, he retired to Ruski Krstur, where he died on October 19th, 1981. He was buried in a parish church of Saint Nicholas, which has been a cathedral of exarchs for believers of Eastern-rite in Serbia and Montenegro since 2003. It is believed that his greatest contribution was gathering theologians from other dioceses, in order to provide clergy for the archdiocese. He participated in the Second Vatican Council, where it was noticed that “his personality beamed”.

He was born in Stari Pazin in Istria, Croatia, in 1880. After his studies, he was ordained as a priest in Trieste, 1902. He earned his PhD in Vienna in 1908. He was a Bishop’s secretary in Trieste and a professor of moral theology in Gorica at the same time. He was a chaplain on the czar’s court between 1912 and 1918 and a director of The Higher Scientific Institute for Diocesan Priests at St. Augustine’s (’’Augustineum’) in Vienna. After the First World War, he became a professor of moral theology at a newly founded Faculty of Theology in Ljubljana.

He was appointed as the Archbishop of Belgrade-Smederevo and an apostolic administrator of Banat on November 28th, 1936. Although he was prepared for numerous inherited problems in the Archdiocese, including financial ones, he managed to save what could be saved, thanks to his capability and comprehensive contribution and by directing work of the Archdiocese to its development, as well as spiritual life of its believers. He witnessed to a so called Concordat Crisis, 1937, due to dissatisfaction of some politicians and clergy that didn’t agree with signing the Concordat between Vatican and Kingdom of Yugoslavia. The outbreak of the Second World War, the break-up of Yugoslavia and German occupation brought enormous troubles both to the Archdiocese and him personally. He put a lot of effort in providing help and offering hope to the unfortunate. However, due to new historical mishaps, a lot of Catholics left Belgrade and Serbia. On the other hand, a lot of Slovenians, who were banished from their homes, came to Belgrade and central part of Serbia, including priests, monks and nuns. He went out of his way to look after the refugees, besides Serbian hospitality. After the war, during first years of communist Yugoslavia, he faced with numerous troubles of his parishioners. At the same time, pastoral centers were desolated in the central part of Serbia, while a part of church property was nationalized. It took him a lot of effort and wisdom to preserve the Archdiocese. The end of diplomatic relations between Yugoslavia and the Holy See in 1952 was a serious moment in his term.

He succeeded in communicating with different people, including the authorities, being aware of all limitations. He managed to lead the Church with no major issues given the circumstances. He was the president of the Bishops’ Conference of Yugoslavia for 14 years. His great contribution was reissuing the magazine “Blagovesti”, 1946. He took part in the Second Vatican Council, 1962-1965. He received the highest state decoration when he was 80 and the Holy See acknowledged his work. He died on March 24th, 1964, exhausted by an illness. He was buried in the church Christ the King in Belgrade.

He was appointed as apostolic administrator of Banat with head office in Veliki Bečkerek (Zrenjanin) in 1923. He was appointed as the first Archbishop of Belgrade-Smederevo on October 29th, 1924. He had huge tasks ahead, since the work of restored Archdiocese should be organized at all levels. Thanks to his persistence, he established parishes in Belgrade and in central part of Serbia. He blessed numerous lay communities. He contributed to the foundation of charities. One of his great successes was Eucharistic Congress, held in Veliki Bečkerek (1934).

He wasn’t so successful in his financial endeavors, which were a consequence of wrong advising according to latest findings. Those events brought a lot of inconveniences to the Archdiocese and him personally. He resigned in 1936 in order to help the Church. He lived in Kostajnica after that and then he lived in Požega from 1938 to his death on May 10th, 1954.