HomeNewsPope Francis: Injustice is not invincible

Pope Francis: Injustice is not invincible 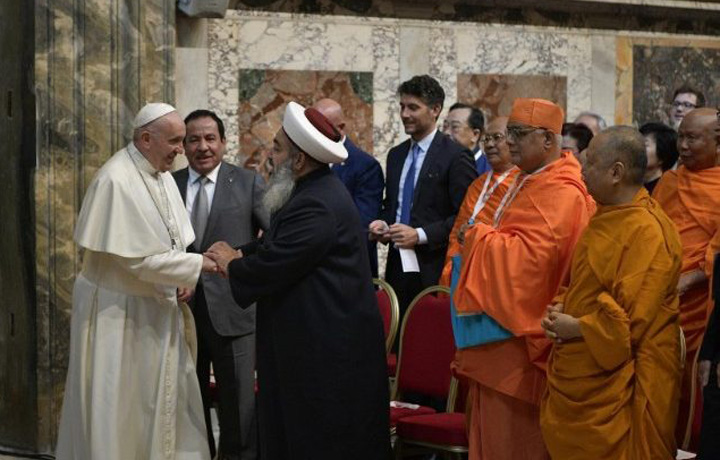 Pope Francis warned the participants of the Conference on religions and sustainable development about a need of “ecological conversion” in today’s world. The role of religions is significant and they should share their valueswith all people in order to engage in a genuine dialogue on how the future of our planet should be built.

“I encourage you to continue fighting for the changes that present circumstances demand as the injustice that brings tears to our world and the poor is not invincible.” Pope Francis directed this message of hope to 400 participants of the international conference on “Religion and sustainable development goals” who he had audience with yesterday. The Conference, which was jointly organized by the Vatican Dicastery for Promoting Integral Human Development and the Pontifical Council for Interreligious Dialogue, started on March 7 and ended on March 9.

The first thing that the Pope emphasized in his speech was the importance of listening and involving more voices when we talk about sustainability, in order to transform opinions and suggestions into the result of general participation. “However, the term ‘development’ is complex”, as Holy Father notices, and “it has long been limited to economic and material growth, with GDP as the only indicator.”“That led to irrational exploitation of nature and human beings as well”, the Pope warned.

“In fact, as my predecessor Saint Paul VI pointed out, to speak about human development means to speak about all people, not only a tiny minority, but about whole human being, and not only material dimension”, the Pope highlighted and added “that one fruitful discussion on development should give viable models of social integration and ecological conversion, as we cannot develop as humans by inciting increasing differences and degrading of the environment”.

“We need to reject negative models and take alternative ways freely and responsibly; we need to provide concrete answers to the cry of the planet and the poor.” According to Pope’s words, religions are also invited to participate in this quest. We talk about concrete suggestions that would facilitate development of those who are in need, using what Pope Benedict XVI sees as “the unprecedented possibility for large redistribution of wealth on a world-wide scale”.

“Furthermore, we need economic polices that are focused on a person and that can promote more humane market and society; concrete economic measures that can seriously take into consideration our common home; those concrete ethical, social and political commitments that can develop along with our sister Earth, and not despite of it”, the Pope emphasized.

Development is inseparable from justice and fraternity

“It is necessary to find shared responses for the well-being of the planet and entire humankind. Therefore, religions should share their values with all people, in order to engage in a genuine dialogueon how the future of our planet should be built, Pope Francis pointed out and reminding of the encyclical “Laudato si”, he said that “a true concern about our own life and our relations with nature is inseparable from fraternity, justice and faithfulness to others”. However, economic and political aims should be supported by ethical objectives that presuppose a change of attitude; what would Bible call a change of heart.”

The importance of religions and indigenous people

According to the Pope, religions have a key role in all of this, starting from confession of our own mistakes and oversights towards others, all that is created and the Creator. Furthermore, the Pope highlighted the importance of indigenous people, experts and custodians of unique cultures and relations with nature. These peoples remind us all of the sanctity of our planet in strongly secularized world. That’s why their voice and concerns should be at the center of implementation of Agenda 2030 and at the center of searching for new ways of sustainable development.

The Pope concluded that even though the task may seem too difficult, it is not impossible. He encouraged the participants of the conference to keep on going down the path of change in order to promote sustainable future. He added that the injustice that brings tears to our world and the poor is not invincible.