LUX SPEI – THE LIGHT OF HOPE! This word of the psalmist is not “the word of some hidden tactics” for me, but the basic experience of life and the deepest conviction of my personal mission – the mission in Serbia. If we are inclined to continue to use the word “Balkans” in a pejorative way, I want to be deeply convinced that the Balkans can be “the blooming Balkans of Europe”. It is for this reason that we invite you and with this power of hope I sincerely salute you!

A er a decade of comprehensive study, experience and veri cation, today we can present you a versatile and realistic “Plan of revitalization of the building of our Archdiocese in the years 2018-2020”. is Plan is in the service of people, communities, the most needed … Each of our “structures” radiates hope, broader dialogue and understanding, connects the East and the West. It surely is the landmark for the future!

In the name of the Lord, I urge you: do not let the darkness prevail in the Balkans! Let the light of hope shine!

In 1914 there was a Concordat between the Kingdom of Serbia and the Holy See and according to it, Belgrade Archdiocese was established.

The surface of Archdiocese today is about 50,000 km2 and it covers the whole of Serbia excluding Vojvodina, and it has about 40,000 believers. In 1968, Pope John Paul II formed Belgrade Metropolitan which includes Subotica and Zrenjanin Diocese.

With the desire to present the Belgrade Archdiocese in 2018 as a place of new initiatives for the promotion of interreligious, intercultural and social dialogue, with a special emphasis on the value of the modern diocese, Archbishop Hočevar launched an integral project of repositioning the capital values of Belgrade Archdiocese.

The project activities aim to strengthen the strategic position of Belgrade Archdiocese, both in the domain of sustainability of its daily functioning, and in the mission of achieving capital projects that for many decades have not had the opportunity to be realized.

The activities of Belgrade Archdiocese in the field of reconstruction of several facilities on the territory of Serbia require serious preparation, significant financial resources, as well as support from several countries and institutions in the country and abroad.

Church of the Assumption of the Blessed Virgin Mary and Parish,
Hadzi Milentijeva 75 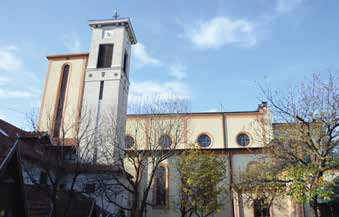 The largest, most challenging and most important complex – building and premises of the Archdio-cese: Parish and cathedral church with crypt, auxiliary chapel and relatively large space (depot, museum, exhibition); spiritual – studying pastoral centre which serves, at the same time, as a religious tourism hostel (stella comans); a kindergarten with all additional facilities and a parish – parochial home where accommodation should be provided for three or ve sick or elderly priests which has an exceptional pastoral, as well as a historical and cultural significance – it is an expression of the great cooperation between Serbia and France in the post-World War I period.

This parish and cathedral represent the places of all major liturgical gatherings and events: pilgrimage, hand-washing, concerts.

By finding a solution for parking space, a modern center of integral dialogue, especially ecumenical-interreligious, as well as cultural and social, could be established.

Belgrade – The Parish and the church CHRIST THE KING 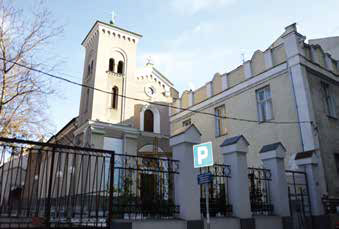 The parish of Christ the King, for years and decades, has been a bastion of spiritual and human values. Regardless of time and dificulties, it provided help for all those who have sought sanctuary and peace, encouragement, hope and help. It has never discriminated between “you” and “me”, “them” and “us”, it has always given out gladly, and always with open heart.

Now it needs your support and help, your hand, your minute of time, so that in the years ahead, we continue to shine with the same light and the same significance.

At this place, we are most connected with the past, and the unity of all spiritual centers in Belgrade is brought to life here. It is here that the international community “breathes” through the synergy of unity in great cultural diversity.

Šabac – The Parish and the church SAINT ANN 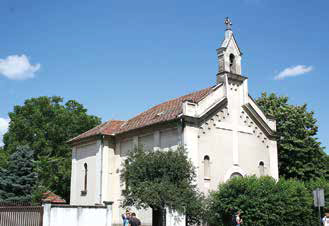 On the river Sava bank, on the shaky ground of history, built with great urgency in the beginnings of the Kingdom of Serbs, Croats and Slovenes in the triangle of present day Serbia, Bosnia and Herzegovina and Croatia it represents a versatile and urgent challenge both because of its significant deterioration, as well as because of the possibility of extraordinary pastoral but especially charitable activities of the parish Caritas.

Kragujevac – The Parish and church of SAINT JOSEPH 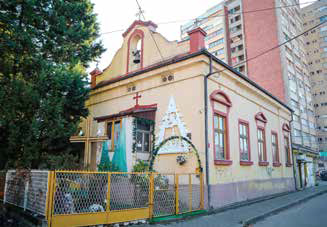 The church and pastoral building originated from the sanatorium and require a radical building approach in order to respond to the contemporary needs of a multi- cultural and multi-ethnic industrial city.

Donor funds can be paid through direct payments to the accounts of Belgrade Archdiocese or Christ the King Parish. For larger donations by companies and other legal entities, please contact us directly.